FIBA men and women’s AfroBasket 2017 are coming on StarTimes 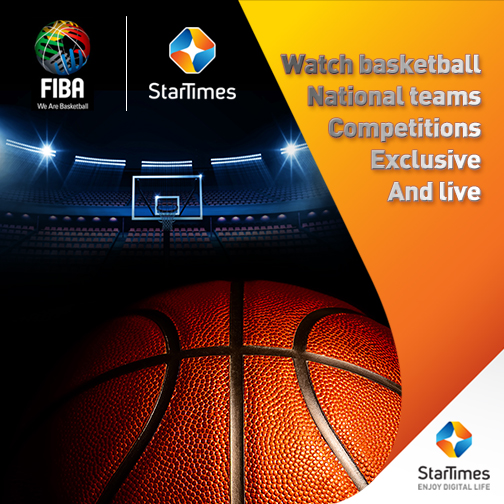 From August 18th to 27th, Mali will host the 23rd AfroBasket Women. 12 teams will compete to win the continental title.

Then from September 6th to 18th, FIBA AfroBasket 2017, the continent's flagship basketball event, will take place in Senegal's capital city of Dakar and the Tunisia's capital of Tunis.

Vincent Yu, StarTimes Media Division Chief Operating Officer, said: “We are excited to broadcast live FIBA women and men Afrobasket 2017 which are our first events since acquiring exclusive broadcasting rights of FIBA international tournaments. We did not waste time in implementing this agreement because as soon as fans learned we got FIBA rights, they told us they couldn’t wait to watch top international basketball.”

FIBA Women’s Afrobasket 2017 teams are expected to fight tooth and nails. Favorite teams all have something to prove. Hosts Mali want to win the title after their defeat at home in 2011. Senegal will defend their 2015 title. And Angola want to show that they are African best team after winning the tournament in 2011 and 2013.

FIBA AfroBasket will see African champions Nigeria look forward to retaining their first continental title. Angola will be looking for revenge after the last edition where they lost in the final. Cameroon will seek to equal or even better their performance at the FIBA AfroBasket 2007 where they finished second. And Cote d’Ivoire are leaving nothing to chance in their bid to storm the tournament.

FIBA Women’s Afrobasket and FIBA AfroBasket will be broadcasted live and exclusive on the StarTimes Sport Premium channel.

“I am very excited to watch these tournaments. We will see the best of African basketball. I expect a lot of surprises. Especially during Women’s AfroBasket where stakes are really high as teams will battle for a ticket to 2018 World Cup,” said the Sports Director of StarTimes Media Division, Cole He Xin.

On July 20th, consistent with its mission and values to offer the best sport content, StarTimes acquired exclusive media rights in Sub-Saharan Africa for FIBA's national team competitions during the period 2017-2021, including the FIBA Basketball World Cup 2019 in China.