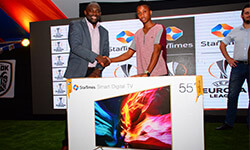 …Broadcaster secures exclusive rights for three seasons running up to 2021 …

Nairobi, 20th September 2018. Pay TV provider StarTimes Media has acquired the exclusive broadcast rights for UEFA Europa League. This will see the broadcaster air 205 live soccer matches during each of the three seasons that will run until 2021.

The media rights will run across all platforms including pay television and online mobile application enabling subscribers to access the premium European Club Competition both at the comfort of their homes and on the go.

Speaking during the launch ceremony, StarTimes Marketing and PR Director Mr. Japhet Akhulia noted the brand’s progressive efforts to secure content that continues to distinguish StarTimes as the home for Premium sports content at the most affordable subscription rates in the market.

“The acquisition of exclusive broadcast rights for the UEFA Europa league for the next three seasons is very strategic as this is a culmination of our dedicated efforts to continue airing premium sports content while remaining affordable for the majority of Kenyans who want to enjoy at the comfort of their homes and flexibility through the StarTimes mobile APP,” noted Mr. Akhulia.

The development adds to the already rich football action available on the StarTimes platform which includes broadcast rights to the on-going German Bundesliga, French Ligue 1, Ghana Super League as well as the FIFA Club World Cup which is expected to kick off in December.

StarTimes subscribers will enjoy the UEFA Europa league and other top tier soccer leagues from as little as Ksh 599 per month on basic bouquet. Other bouquets include Classic and Unique bouquet that retail at 999 and 1,499 respectively. Subscribers on the lowest bouquet – Nyota Bouquet that retails at Ksh 259 per month will access also enjoy access to select matches.

The same will be available from as little as Ksh 899 on Smart bouquet and Ksh 1,499 for Super bouquet on the StarTimes satellite television platform.

The company’s flexible subscription payment options continues to allow subscribers the freedom to pay conveniently daily, weekly or on a monthly basis in an effort to ensure fans do not miss a single match.

Of the four bouquets available on the StarTimes terrestrial technology platform, subscribers pay a daily fee of as low as Ksh 22 on Nyota bouquet, Ksh 50 on Basic bouquet, Ksh 83 on Classic bouquet or Ksh 125 for Unique bouquet.

StarTimes subscribers on the satellite television platform are also in a position to access three of the available bouquets at a daily rate of Ksh 37 for Nova bouquet, Ksh 75 for the Smart bouquet and Ksh 125 for the Super bouquet.

“During the three UEFA Europa League seasons, we will have broadcasted up to 615 live soccer matches this in addition to the over 20 weekly live matches available from the broadcast of the top tier soccer leagues which presents rich offering for every soccer fan in the country,” concluded Mr. Akhulia.