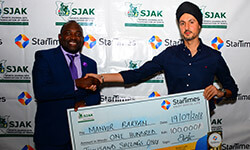 Navigated by his British partner Drew Sturrock, the Multiple Racing Team Skoda Fabia R5 speedster racked up the coveted award following exhilarating cockpit displays which saw him sweep the ground with all and sundry on the prestigious Gomes Zambia International Rally. The Zambia rally -synonymous with the legendary Muna Singh rally dynasty of Lusaka- counted towards the fourth round of the FIA African Rally Championship (ARC) 2018.

Prior to a career second Zambia triumph, Manvir entered his name in the annals of continental rallying history in April by being the first ever non-South African competitor to win ARC 3 York Rally (formerly Sasol Rally) in Nelspruit.

Speaking during the ward presentation, StarTimes Kenya Marketing Director, Japheth Akhulia said, “StarTimes has endeavored to recognize and reward excellence in major sports genres, this award is a true testament of our diversity where in the past 12 months, it’s the very first time we are awarding a rally champion. Our aim is to inspire stakeholders in the sports fraternity and progressively support the diverse disciplines to achieve greater success.”

In winning the June award, Manvir savored a cash award of Ksh 100,000, a personalized trophy and an elegant StarTimes 43’ inch LED TV.

Manvir beat three other nominees to a cutthroat awards procedure conducted by a battery of SJAK scribes’ panel.

The previous record of 59.93 metres was set in 1993 by Patrick Njoroge. Another nominee for the June award was Mathew Sawe who improved his National High Jump Record to 2.30 metres also at the AK National Athletics Championships.

And it was a pleasant surprise for Manvir who is shaping up for the iconic ARC 7 Rwanda Mountain Gorilla Rally after clinching the FIA continental rally diadem.

Flanked by Kenya Motor Sports Federation General Manager Mwaura Njuguna, the MRT ace driver said, “It’s such a great feeling to be considered for any award alongside Kenya’s world beating middle and long distance runners. I’m overly excited to lay my hands on this award and the fact that the rally sport is finally regaining the recognition it has held for donkey’s years. I take this opportunity to thank sports scribes and StarTimes for their unswerving support of rewarding and acknowledging local sports personalities; for me it hasn’t sunk in yet.”

“On behalf of KMSF, I would like to salute Manvir for his exceptional driving lines and uncanny knack on the continental area which has seen his race adversaries trail in his dust.”

SJAK President Chris Mbaisi congratulated Manvir for his consistency over the past two seasons. “The award cuts across all sports from athletics to table tennis. We have been doing football for a while now and we felt it was also good to get something for other sports,” Mbaisi said.