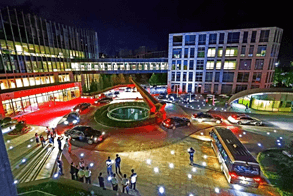 2018 is special for StarTimes as it marks the 30th anniversary of the founding of the company and it is also the 10th year since StarTimes has entered African market in 2008. Now, with nearly 20 million users all across the continent through terrestrial and satellite television as well as its new online video streaming service, StarTimes is the leading digital TV operator in Africa.

The followings are Top 10 keywords of StarTimes in the past year:

As the official broadcaster of 2018 Russia World Cup, StarTimes broadcasted all 64 matches in full HD on both DTT and DTH platforms, which means African football fans enjoyed a clearest World Cup ever.

During World Cup, all of live games, full highlights, build-ups, interviews, analysis and magazine shows on StarTimes sports channels will be offered in full HD.

To get people into World Cup atmosphere, StarTimes forged a series of World Cup special programs, such as World Cup Trekker, World Cup Fiesta and Road to Russia.

In November 2018, StarTimes launched a new brand, StarTimes ON, for its online video streaming service, dedicated to providing ultimate entertainment and enriched experience.

With the launch of StarTimes ON, the original StarTimes App has been upgraded to StarTimes ON. StarTimes ON provides Live TV, VOD and short videos with covering news, sports, movies, series, music, entertainment, documentary, kids and religion.

Currently, there are total 150+ channels in over 10 languages available on StarTimes ON online platform with now over 140 channels being limited free.

Under the guide of Chinese and African governments, StarTimes rolled out the project of “Access to Satellite TV for 10,000 African Villages” in 2018, which enabled thousands of African rural villagers to watch satellite TV.

The project was first announced by Chinese President Xi Jinping on December 4th, 2015, when he was delivering a keynote speech at the opening ceremony of the Johannesburg Summit of the Forum on China-Africa Cooperation.

There are over 10,000 villages in 23 African countries benefiting from the project of “Access to Satellite TV for 10,000 African Villages”.  Under the project, each village is aided with two StarTimes Projector TVs, one 32 inch Digital TV set and 20 DTH decoders and satellite dishes.  Projector TVs and Digital TV set will be equipped with solar power systems and DTH access units.

The Forum on China-Africa Cooperation (FOCAC) Summit was successfully held in Beijing in September with over 3,200 participants from China, Africa and international organizations having attended the summit, making it the largest and most high-profile diplomatic event ever hosted by China.

StarTimes, Africa’s leading digital TV operator as well as a Chinese influential media group, has been a star of China-Africa Cooperation with playing active roles in African digital migration progress, the project of Access to Satellite TV for 10,000 African Villages and African HIV/AIDS Prevent Campaign.

During the summit, StarTimes attracted 18 African presidents and distinguished guests to visit its Beijing headquarters and all of them expressed their admiration and support to StarTimes career in Africa.

After the meeting, StarTimes promoted 4 UNAIDS PSAs on the front page of its online video streaming platform, StarTimes ON in September and December, which helped deliver the HIV/AIDS Prevention messages to African young people.

On May 14th, 2018, StarTimes and SOS Children’s Villages International signed a Memorandum of Understanding (MOU) in Nairobi that the wo organizations partner towards supporting vulnerable families and children, with an emphasis on empowering youth in light of the United Nations Sustainable Development Goals.

It includes technical and vocational skills training and mentorship, alongside driving access to digital television in SOS Children’s Villages programs and benefitting from media exposure on the StarTimes platform.

SOS Children’s Villages would share resources, skills and knowledge as far as youth employability and capacity building is concerned towards the implementation of the MOU.

On June 28th, 2018, the 8th edition of African Digital TV Development Seminar, organized  by StarTimes, was held in Beijing with a focus on reviewing trends, developments and cooperation towards digitalizing broadcasting in Africa, as well as OTT industry which is upgrading African television landscape.

This year’s seminar recorded a landmark with over 400 delegates, dignitaries, heads of broadcasting corporations and guests from 48 African and Asian countries attended the event.

According to Oga Bello: “Producing this series for StarTimes was a deliberate decision because of the positive impact that StarTimes has had on the African continent especially with its contribution to local content across Africa.”

In 2018, StarTimes unveiled the biggest ever single sponsorship in the history of Ugandan sport after remarkably securing the Uganda Premier League and FUFA Big League "Title and Broadcasting Rights" from FUFA for a staggering US$ 7,240,000 for 10 years starting with the 2018/2019 season.

The FUFA President Moses Magogo was full of praise for StarTimes and thanked them for the endorsement this gesture has given to FUFA’s leadership: “The enabling environment that FUFA has created by improving the image of local football and setting in place visible systems and structures to improve the game is now paying off. Sponsors are strategic stakeholders in football and it’s incumbent upon the football fraternity, leaders, players and everyone to support StarTimes who have selflessly demonstrated their goodwill to see Ugandan football progress with this historic sponsorship.”

The Vice President of StarTimes Uganda company, Aldrine Nsubuga said: “The legacy we want to leave behind in the Ugandan local communities is the support towards the development of football -the game that unites the whole country without bias. A strong top division league reflects on the strength of our national team the Cranes.”

The StarTimes President said in his peech: “In the past 30 years, the setbacks that we have had experienced, the difficulties we have had overcome, and the crises that had been resolved cannot be expressed by numbers. But no matter what, we always stay true to our mission and never give up. In the spirit of persistence, we are unswervingly moving toward our established goals.”

He stressed that no matter how the market changes, no matter how perilous the situation is, our vision of “enabling every African family to afford digital TV, watch digital and enjoy digital TV” remains unchanged.