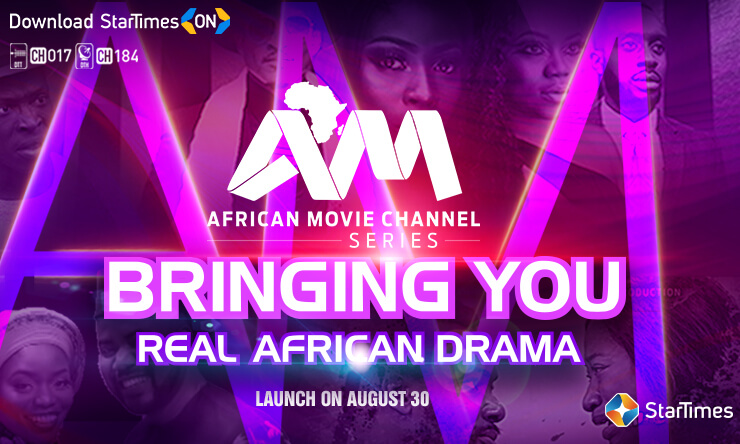 A year after African Movie Channel’s AMC Series channel departed StarTimes, it is making its return to the television platform.

AMC Series is a premium 24-hour African entertainment channel, showcasing only the best and award-winning TV soaps, comedy and drama mainly from Nigeria, peppered with some of the best series from all over Africa. The channel is modern, fun, urban, in addition to being classy and aspirational.

StarTimes’ subscribers will be entertained with action packed, adrenaline-boosting blockbuster series like Oghenekome starring Ramsey Nouah, Rachel Oniga and Segun Arinze, among other top Nollywood stars; exciting comedy shows like Gina and Friends, brand new seasons of Papa Ajasco Reloaded, Relatives, and Life Of A Nigerian Couple, contemporary vibrant TV series such as She Drives Me Nuts, After Wedding, 40 And Single, Meltdown and many more.

AMC Series viewers will also have exclusive access to various AMC in-house productions like AMC Movie Talk, The Hangout, AMC Music Lounge and Nollywood 360. Future programming will feature new dramas, sitcoms and comedies alongside celebrity and entertainment TV shows that will resonate with its broad spectrum of viewers.

AMC Series is the second premium channel from AMC, and it complements the already phenomenally popular African Movie Channel that has been on the StarTimes DTT and DTH platforms since 2012. Both channels together provide the full package of unparalleled first-class Nollywood and African TV programming that is in a league of its own.

Anona Langa, AMC’s Head of Productions and Channel Manager for AMC Series commented: “AMC Series has always satisfied the growing appetite for African TV serial and short content, and with its new look, including the injection of some exciting exclusive content from our very own production hub, AMCOP, we are sure to thrill current viewers, and attract even more subscribers to StarTimes.”

‘Yinka Mayungbo, founding director of AMC said of the return, “The relaunch of AMC Series on StarTimes comes with a promise to our StarTimes audience that the channel is back to stay. We heard the outcry that ensued following AMC Series’ departure in August last year. We are thoroughly delighted to be back, and this time, for good”

Lily Meng, deputy GM of StarTimes Media Division says, “StarTimes welcome all old friends just as AMC to create better cooperation together in respond to the expectation and requirement from our audiences.  As an Africa-oriented media company, we trust that the joint effort put in local content will further facilitate the development of African culture ”.